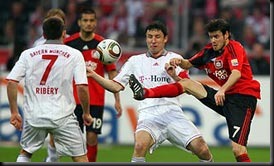 Clearly tired from their recent extraordinary efforts, Bayern were below their very best on Saturday but still battled to a hard-earned point away to third-placed Bayer Leverkusen.

The 30,210 full house at the superbly renovated BayArena saw Munich dominate the opening exchanges but Leverkusen finish the first half much the stronger. Arjen Robben handed the visitors a 51st-minute lead from the penalty spot, but Arturo Vidal levelled just eight minutes later. FCB’s midweek exertions began to take their toll as the game wore on and the leaders toiled under heavy pressure at times, but the Bavarians defended tenaciously and came away with a point which could yet prove crucial in the title race.

The result means Bayern move onto 60 points from 30 games, stretching their lead to two points over Schalke, who were beaten 4-2 away to Hannover, and maintaining their six-point advantage over Bayer with four games to go.

Louis van Gaal made just one change to the side which lost to Manchester United but progressed to the Champions League semi-finals in midweek, restoring fit-again Mario Gomez to the side and handing young Thomas Müller a rest among the subs.

The FCB line-up had an authentically first-choice feel to it, with Robben and Franck Ribery on the flanks, and midweek goalscoring hero Ivica Olic partnering Gomez up front. The usual back four of Holger Badstuber and Philipp Lahm at full-back, and Martin Demichelis and Daniel van Buyten at centre-half, lined up behind Bastian Schweinsteiger and skipper Mark van Bommel in central midfield.

Once referee Knut Kircher whistled proceedings underway on a fine afternoon in the Rhineland, Robben whipped in a dangerous free-kick in the very first minute of play and then squared just behind the lurking Olic as FCB seized the early initiative. A trademark Robben run was only halted by Lars Bender’s last-ditch lunge, before Gomez dragged the best chance of the game so far across Bayer keeper Rene Adler and wide of the far upright.

Gonzalo Castro signalled the home side’s arrival as an attacking force on 25 minutes with a piercing drive just past the post, before Eren Derdiyok had Bayer old boy Jörg Butt at full stretch to keep out a firm header from a Tranquillo Barnetta cross.

Jupp Heynckes’ men came even closer seven minutes from the break when the nervy Badstuber misjudged a Toni Kroos lob and the ball ran loose to Barnetta, but the Swiss midfielder crashed his eight-yard drive off the outside of the post. The same player smacked the last chance of the first half direct at Butt as the sides turned round with no score on the board.

Just five minutes after the restart, Ribery finally received the ball in space on the left and darted into the box, where the Frenchman was felled by Castro. Referee Kircher immediately pointed to the spot, Robben stepping up to send Adler the wrong way and hand Munich the lead.

Kroos volleyed narrowly wide as Bayer sought a way back into the match, and there was a let off for the visitors on 58 minutes when Stefan Kießling’s header rebounded off the post, hit the diving Butt on the back and spun off the line but away from goal. The respite was only brief, as Chile international Vidal thumped home the equaliser just a minute later, after a Kroos free-kick rebounded from the post and was inadvertently steered back into the danger area by Van Buyten’s block on Kießling’s follow-up effort.

The contest took on an absorbing character now as the home side poured forward in search of the win, but Bayern sought to strike on the break, enlivened by the introduction of Müller for the tiring Olic. Adler saved Robben’s swerving cross-shot, but Kroos squandered a golden opportunity at the other end, screwing his volley wide from close range after a flowing four-man move.

Miro Klose and Danijel Pranjic took over from Gomez and Van Bommel for the last ten minutes, but Bayern appeared to have little left in the tank by the end, and were grateful to Butt for a brave save at Derdiyok’s feet after Demichelis’ back-pass came up short. Munich might have had a penalty in stoppage time when Hans Sarpei clearly tugged at Müller in the box, but the award was not given and Bayern will ultimately be happy enough to have taken a point from their last match against title rivals this term.