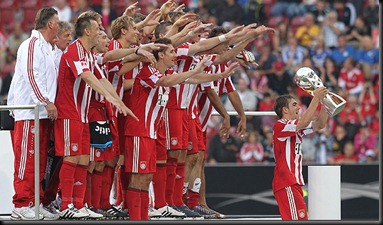 Augsburg: Bayern München picked up where they left off last season, taking the first piece of silverware of the new season with a 2-0 victory over Schalke in the 2011 Supercup.

Two goals inside the final quarter-hour from Thomas Müller and Miroslav Klose broke down a compact Schalke defence and gave the Munich side an ultimately deserved victory on the balance of play – and one which coach Louis van Gaal had predicted would be "very difficult" to achieve, given the disruption to his preparations.

A stronger than expected Bayern side took to the pitch against the team they pipped to the title last season. Van Gaal included five of his German World Cup contingent, even though they only returned to training at the start of the week. It was a particularly special occasion meanwhile for Thomas Kraft, making his competitive debut in goal for the champions.

With six minutes played, Kraft was almost called into action by a player at the other end of the big-match experience spectrum; Schalke’s new superstar Raul got on the end of a cross from the right, but his header flew just wide of the post.

Few chances in the first half

The men from Munich continued to see much more of the ball in the period that followed, but Schalke were closing them down early and gradually trying to shift the focal point of the action further away from their own goal. Ivica Olic, one of the Bayern contingent not to have spent a working holiday in South Africa, was an ever-willing recipient of the ball as they tried to work up some forward momentum, but the half wore on with the defences very much on top and next to nothing in the way of clear-cut chances for either side. Schalke’s new right-sided defender Atsuto Uchida put in a last-ditch tackle shortly before the break to prevent Müller getting in on goal and that was that for a low-key first 45 minutes.

The second half started far more promisingly, with Bayern seemingly determined to shift up a couple of gears. Seven minutes in, Schweinsteiger released a great pass from the halfway line into the path of Miroslav Klose, who took it in his stride and rattled the ball against the post with Neuer beaten.

Schalke responded in kind, breaking immediately up to the other end in a move that ended with Raul’s diving header pulling a great save out of Kraft. With the atmosphere warming up in the stadium, an Ivan Rakitic cross from the right then bypassed four Bayern players and landed at the feet of a surprised Jefferson Farfan, who was swiftly dispossessed by Holger Badstuber.

There were more chances as the game entered the final twenty minutes of regulation time. Neuer just beat Klose to a dangerous low cross from Philipp Lahm (69′), and five minutes later Kraft pulled off another top-drawer save at the other end, pushing a shot from an unmarked Edu over the bar following a corner. Then, in the 75th minute, the breakthrough: Bayern substitute Andreas Ottl pumped a long pass forward, Neuer rushed out to clear it and failed; Klose left the finish to Müller and he steered it into the empty net from the edge of the area to put Bayern in front.

Now firmly in the driving seat, Bayern clearly wanted to make sure they stayed there. In the 81st minute, after Edu had fired a free kick straight at Kraft, a counter-attack ended with Olic turning sub Sergio Escudero inside out before delivering a low ball into the box that Klose dispatched from close range to seal the contest.