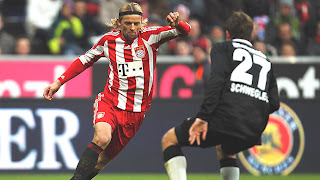 FC Bayern München extended their unbeaten run to seven matches with a comprehensive 4-1 beating of Eintracht Frankfurt at the Allianz Arena.

Anatoliy Tymoshchuk started and finished the scoring for the Bavarians, though really the game was won either side of the hour mark as Thomas Müller and Mario Gomez exploiting two awkward parries from Frankfurt keeper Oka Nikolov. The visitors had equalised soon after Bayern’s opener through top scorer Theofanis Gekas, but in truth their defensive stall was always susceptible to the home side, who finally move into the top five and thus the European places.

Pressure from the start

With Frankfurt making six changes to their starting line up, it came as little surprise that Bayern bossed the early possession, yet it was the visitors who should have opened the scoring with 13 minutes gone. Gekas pounced on a defensive howler by Daniel van Buyten and made his way around Jörg Butt, only to see his finish cleared off the line by Breno. Sonny Kittel, making his first start of the season, could only send the resulting pull-back wide.

Breno was again the saviour for the hosts soon afterwards as he foiled Gekas after the Greek had again snuck in behind the Bayern back line, and the guests were left ruing those earlier missed opportunities in the 29th minute as Anataliy Tymoshchuck fired in a measured left-foot strike from the right hand side of the box.

The lead was short-lived, however, as another defensive error from the Bavarians allowed Frankfurt to equalise. Marcel Heller’s floated cross from the right was missed by the hapless van Buyten, allowing Gekas to head goalwards. Butt managed to tip the ball onto the post with his fingers, but the Bundesliga’s top scorer reacted quickest from the rebound to stroke home his 12th of the season.

Michael Skibbe’s injury-depleted side then came under serious pressure before the break with Bayern winning corner after corner. Louis van Gaal’s side should have restored their lead on 39 minutes, but Müller poked wide after being slipped through by Franck Ribery. Gomez also rounded Frankfurt keeper Nikolov with the half almost over, but he deservedly found the side netting after handling his way past the visiting shot-stopper.

Bayern’s dominance of possession continued into the second half and the chances began to pile up. The first went the way of Gomez, who grazed the outside of the post from the angle after being set free in the box by Ribery. Indeed, it began to become a question of how long Frankfurt could survive wave after wave of Munich attacks, and the answer became apparent just before the hour. Nikolov spilled a relatively straightforward strike from Toni Kroos. Müller was on hand to nick the ball away from the Macedonian shot-stopper and showed good awareness to net on the spin.

The three points were all but sewn up just two minutes later as Gomez rolled in number three, Nikolov again parrying into the danger zone from Ribery’s original shot. That double setback left Frankfurt devastated, but still they managed to carve out their best move of the half as Fenin forced a top save from Butt with a controlled volley on 84 minutes. However, the day clearly belonged to Bayern, who rounded off the victory with Tymoshchuk’s simple fourth following a well-worked build-up with Ribery.