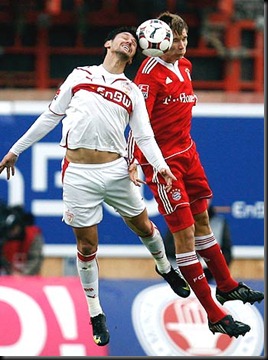 FC Bayern München lost their second consecutive Bundesliga encounter as VfB Stuttgart took all three points back home with a 2-1 away victory at the Allianz Arena.
With both Franck Ribery and Arjen Robben beginning the match on the bench at the, Bayern struggled to create clear cut chances in the opening phase despite having the majority of the possession. Consequently, Stuttgart’s Sami Khedira had the first effort on goal, though his 18-yard strike was comfortably repelled by FCB keeper Butt.

This was the signal for Bayern to unleash their attacking fireworks. Miroslav Klose and Daniel van Buyten both had decent opportunities to open the scoring, but neither managed to direct the ball on target. Just a few minutes later, however, and Ivica Olic converted a Pranjic cross from the left hand side to give Bayern a well deserved lead just after the half hour mark.

Stuttgart however, remained undeterred and quickly gathered momentum with several promising attacks. Marica had a great opportunity, but his sloppy finish from 10-yards went well wide (39′). Two minutes later, though, and Stuttgart netted the equaliser when a Träsch shot deflected beyond the reach of Hans-Jörg Butt to send the teams in 1-1 at the break.

With the substitutions of Arjen Robben and Franck Ribery at half-time, Bayern coach Louis van Gaal gave a clear sign that he was out to put the visitors to the sword as quickly as possible. However, the Bayern’s defence was what he should have been focusing on as they failed to clear the ball following a corner kick just four minutes after the restart. Cacau’s cross found Marica completely unmarked at the far post and the Romanian striker had no trouble nodding the ball home from close range.

Bayern reassumed control of possession despite the deficit, but apart of a Klose header in the 62nd minute, they failed to produce any chances of note. Stuttgart were keen to defend their lead and wait for chances to counter attack, while Bayern struggled to take advantage of the away side’s unwillingness to get forward.

Bayern’s second consecutive Bundesliga defeat could result in them losing their lead in the standings, with both FC Schalke 04 and Bayer 04 Leverkusen in a position to overtake them when they go head-to-head later on Saturday. Victory for Stuttgart, meanwhile, means their outside chance of a Europa League place remains intact.