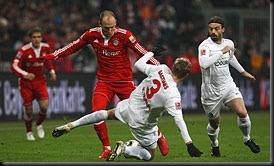 They left it late, but Bayern München came good in the end to turn around a 1-0 deficit and snatch victory against SC Freiburg.
The 2-1 win sends the Munich side back to the top of the standings, two points clear of Schalke. Freiburg left the Allianz Arena empty-handed despite a great battling performance and remain mired in second-bottom place.

Ivica Olic almost marked his return to the Bayern first team with a goal in the fourth minute, taking the ball on the left-hand side of the box and trying to nutmeg Simon Pouplin, but the Freiburg keeper reacted well to block the shot. The visitors were unsurprisingly banking on in-depth defending in the early stages and the tactic seemed to be paying off.

For all their overwhelming dominance of possession, Bayern needed the best part of half an hour to carve out their next real chance of note, an unmarked Miroslav Klose heading a long ball well wide from close range in the 28th minute.

Three minutes later, the first goal fell – but against all expectations, it was at the other end of the pitch. Cedric Makiadi latched onto a pass from Yacine Abdessadki and whacked a shot high into the corner of the net past a helpless Jörg Butt. 1-0 to Freiburg and the game in the Allianz Arena had suddenly taken on a very different hue.

Bayern pressed forward immediately in search of a quick leveller, but were caught out on the break by an increasingly confident guest side in the 37th minute, Jonathan Jäger driving a shot just over from some 20 metres out. The rest of the half played out with the inspiration remaining in short supply for the title favourites and Robin Dutt’s men went in at the break one up.

The second half started out as the first had finished, Freiburg piling men in at the back and looking extremely dangerous on the counter-attack. In the 51st minute Johannes Flum finished one off with a shot just wide of the left post after Bayern, pressing forward, were left exposed once again.

The hour mark came and went with the record champions struggling to muster anything other than speculative shots from distance. They finally created a clear-cut opportunity on 61 minutes, Olic’s low ball into the six-yard box coming off SC defender Heiko Butscher, Pouplin pushing the ball into the path of the onrushing Thomas Müller and the youngster firing it straight back at the keeper.

Bayern went close again some ten minutes later, Olic connecting well with Philipp Lahm’s corner only to see his header blocked on the line. The hosts were really chasing the contest now and soon after, Butscher gave away a free kick for hand ball just outside the Freiburg box. Arjen Robben stepped up and sank the ball in the top left corner, and Bayern were finally off the mark.

Four minutes later Robben nearly grabbed a second, Pouplin blocking the Dutch forward’s shot with his feet and not long after that the Freiburg keeper was earning his corn again, saving from Klose when the striker was allowed to get off a shot unmarked inside the box.

The deciding moment came with the very next attack, when Banovic pulled Thomas Müller down inside the area. The referee pointed to the spot and Robben completed the job with a clinical finish high into the corner. After that there was just time for one more close call each – first to Freiburg as Julian Schuster fired a free kick narrowly wide, then to match-winner Robben, who came within inches of a dramatic late hat-trick with an effort at the other end.