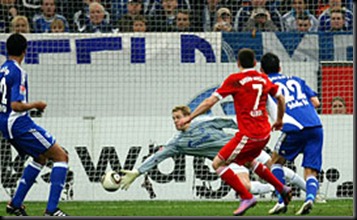 Bayern showed fighting spirit and determination to go with their undoubted footballing quality on Saturday afternoon, playing more than half the match with ten men but still leapfrogging Schalke and returning to the top of the Bundesliga with a gritty victory in Gelsenkirchen.

The 61,673 full house at the Veltins Arena saw Franck Ribery and Thomas Müller smack two goals in a minute midway through the first half to put the men in red firmly in the driving seat, but Kevin Kuranyi pulled one back on the half-hour, and matters worsened for FCB five minutes from the break when Hamit Altintop was sent off after seeing a second yellow card.

The Bavarians set out their stall to protect the lead in the second half, and with Van Bommel a towering figure marshalling the disciplined rearguard, expertly restricted the Royal Blues to a handful of half-chances. Marcelo Bordon was dismissed for a second yellow right at the end as Bayern wrapped up a truly priceless victory, not only in terms of the title race, but also as a huge morale-booster ahead of Wednesday’s trip to face Manchester United.

The courageous win sees Bayern return to the top of the standings on 59 points from 29 games, one ahead of Schalke and now six clear of Leverkusen, beaten 3-2 in Frankfurt in the parallel fixture.
In the continuing absence of cup semi-final match-winner Arjen Robben with a calf strain, Louis van Gaal made two changes to the side which beat Manchester United in midweek. Bastian Schweinsteiger returned from his European suspension in place of Danijel Pranjic, with 19-year-old Diego Contento in at left-back and Martin Demichelis on the bench.

Holger Badstuber lined up at centre-half alongside Daniel Van Buyten, with Müller partnering Ivica Olic up front, Ribery out on the left, and Schweinsteiger alongside Van Bommel in central midfield. Altintop started the match in his town of birth, against his former club.

Once referee Manuel Gräfe whistled play underway under the closed roof of the magnificent stadium in the heart of the Ruhr Valley, the sides spent the first 20 minutes feeling each other out, with a Van Bommel drive wide of the target and Kuranyi’s cross-shot the only chances worthy of the name.

Bayern were forced to make a change midway through the first period when Van Buyten left the field in a daze after a clash of heads, Demichelis taking his place in a like-for-like swap, but FCB shifted up a gear after that and took the lead on 25 minutes. Schweinsteiger neatly headed a short corner back for Ribery, who took one touch to control, and a second to blast an unstoppable 12-yard drive past Manuel Neuer.

Straight from the kick-off, Bayern were two goals to the good when Schalke right-back Rafinha carelessly lost possession to Altintop. The Turkey international released Olic, who timed his run behind the defence to perfection and unselfishly squared for Müller to steer the ball into the empty net.

But the home side responded almost immediately, Rafinha making amends for his clanger with a looping cross from the left for the league’s leading scorer Kuranyi to flick a deft header beyond Jörg Butt’s despairing dive and in at the far post.

The niggle and aggravation between the bitter rivals ratcheted up a notch before the break and Altintop, who had previously seen a yellow card for disputing a call with the assistant referee, received his marching orders for a second bookable offence after clattering into Rafinha.

The ten men of Bayern came out for the second half with clear instructions to protect what they had and look for chances on the break. Kuranyi put a half-chance into the crowd as the FCB defence did its job well up to the hour, and Ribery’s direct free-kick at the other end was not far wide of the target.

Van Bommel’s superb positioning in front of the back four, Olic’s tireless running, and the constant threat posed by Ribery down the flank meant Munich largely kept the Royal Blues well away from their goal for long spells.

But the hard work on the counter-attack took its toll, and Pranjic and Mario Gomez replaced Ribery and Olic for the last 20 minutes. Schalke now launched their final assault and penned the visitors back in their final third with quarter of an hour remaining.

However, Munich time and again expertly released the pressure with controlled movement out of their own half. A couple of long range shots aside, the home side created nothing of note and Van Gaal’s men sealed what could be an utterly decisive victory in the race for the title. To cap Schalke’s misery, Marcelo Bordon was sent off in the last move of the match for a second yellow, on a genuinely good afternoon for the men from Munich.